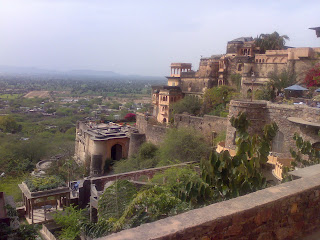 The Spa from Hell
The setting was perfect. A crumbling 15th century Rajasthan palace fort in western India. Perched on the side of an acaia forested hill, with guest rooms oozing mystical magic, hanging gardens, fountains, ponds, turrets, terraces,mazes, secret nooks and crannies. Frequented by mournful peacocks, wild green parrots, monkeys, squirrels, swarms of huge bees.
I was on a marathon fabric buy-athalon in India and decided Sunday called for some downtime. Two hours out of Delhi – there it was – a fantasy hotel clinging to the hillside with impressive views over the village and Rajastani plains below. It was perfect.
But what is R&R without a good massage or spa treatment – I said to myself . Went to the dungeon to sign up and was told there was only a male therapist available. This dismal news resulted in my down grading from a full body package to a head, neck and shoulders deal. Note to self : – NEVER again agree to a male therapist !
an Indian man loves to  parade his strength and manhood – hence the peacock as the national bird. So, having a desparate need to impress me with his brute strength, he proceeded to attack my head with the vigour of a borehole driller, determined to get the coconut cream into the depths of every single hair follicle on my scalp. The pile driving was interspersed with slaps to the crown and violent tossing of my head to and fro. He hurled my cerebellum from one extreme of my skull to the other , pummelling and shaking it like Krakatoa on a good day. I could bear it no longer.
I ordered him to stop immediately – ‘ok, lets move onto the shoulders “ I firmly suggested.
Well, the man had dead hands. No life, no feeling, no passion, no sensitivity. No pizzazz . I so pity his wife .
I gave up, ordered him to stop and asked to be shown to the shower. This was an experience in itself – no door, only a stone three walled cubicle in the foyer area offering no privacy whatsoever.
I left that spa feeling like a newly ploughed field after the oxen have passed over. Four washes later and the coconut cream still refused to budge from my hair.
So much for my R&R
at September 21, 2009

There is a beautiful African folklore story about how the Baobab tree came to be African and also known as ‘the upside-down tree’. ... 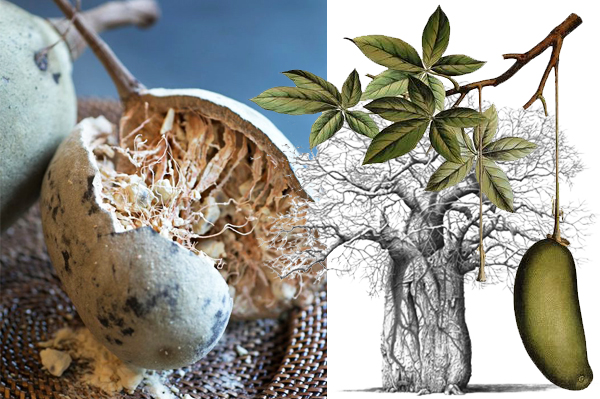 Grace + Merci
Call me an entrepeneur. I have had an antique business,a boutique hotel, a restaurant, a children's brand called Jam, and a body and bath product retail chain called Rain. I have written a book on natural soap making, walked the Camino Frances and survived breast cancer. My entrepenurial life has been a roller coaster epic tale of Snakes and Ladders. Always filled with God given creativity and innovation, I am currently making preparation for my next new and exciting business venture while I live a peaceful life with my husband on a tiny farm nestled in a green valley outside the village of Swellendam South Africa. I am also a serial traveller - probably gypsy blood ! Born with an insatiable wanderlust, I am always ready to pack my trusty leather bag, and head out on the hunt and forage - looking for interesting ingredients, components, finished goods for my next venture.I would love to share the stories of my journeys to find the perfect goods for my store, stories of the makers, farmers, creators and I would like to invite you into a behind the scenes glimpse of the ups and downs of starting a new venture, and watch me give birth to a new brand.